The Utah State Legislature is the state legislature of the U.S. state of Utah. It is a bicameral body, comprising the Utah House of Representatives, with 75 state representatives, and the Utah Senate, with 29 state senators. There are no term limits for either chamber.

The Legislature convenes at the Utah State Capitol in the state capital of Salt Lake City. In 2020, voters approved an amendment to the state constitution that changed the legislative start date from a constitutionally mandated fourth Monday of January to a date set by state law (thereby making it easier to change the start date if necessary). Current state law requires the start date of the Utah State Legislature to be the first Tuesday after the third Monday in January  for an annual 45-day session.

The Utah House and Senate passed separate resolutions Wednesday reiterating their commitment to the constitutional right to bear arms and expressing their desire to explore the possibility of declaring the state a “Second Amendment Sanctuary.”

The nonbinding resolutions, approved in an “extraordinary session” that was called by legislators in defiance of Gov. Spencer Cox’s wishes, are intended to make a statement of values and do not carry the force of law.

Senate Majority Leader Evan Vickers, who sponsored the Senate declaration, said he opted to run it amid “significant public outcry” and concern from constituents about federal gun policies.

The Utah State Legislature meets in the Utah State Capitol in Salt Lake City. The Republicans currently have super-majorities in both the House and Senate. They control the House by a margin of 59–16 and the Senate by 23–6. The current Senate President is Stuart Adams (R), and the Speaker of the House is Brad Wilson (R).

Terms and qualifications
Senators are elected to a four-year term, and Representatives to a two-year term. All state House districts and half of all state Senate districts are up for election every two years. To be eligible for the office of a state senator or representative, a person must be a citizen of the United States, be at least 25 years of age, be a qualified voter in the district from which elected, and must be a resident of the State of Utah for three years and a resident of the district from which elected for six months. There are no term limitations for either the Utah House of Representatives or the Utah Senate.

Sessions
The annual General Session is held for 45 calendar days,[2] convening on the fourth Monday in January.[1] The General Session must conclude by midnight on the 45th day according to the Utah State Constitution. The Governor may by proclamation convene the Legislature in Special Session, to transact legislative business, but no legislative business can be conducted except that which is expressed in the proclamation or other legislative business that the Governor shall call attention to. These special sessions, except in the cases of impeachment, cannot exceed 30 calendar days.[2] The House may convene for the purpose of impeachment if two-thirds of the members are in favor of convening for that purpose. The Speaker of the House shall determine by poll whether there is a sufficient number of members to convene for an Impeachment Session outside the General Session. If the House impeaches an official, the Senate is required to convene to try that impeachment.

Utah Territorial Assembly
The Utah Territory was established by an act of Congress on Monday, September 9, 1850 which provided for a territorial government made up of a territorial governor chosen every four years, a territorial Assembly with a 13-member council chosen every second year and a 26-member House of Representatives chosen annually, and a territorial Judiciary made up of a Supreme Court, District Courts, Probate Courts, and justices of the peace.[6] The creation of the Territory of Utah was part of the Compromise of 1850 seeking to preserve the political balance of power between the slave and free states.[7]

Petitions for statehood
The boundaries of the provisional State of Deseret (orange) as proposed in 1849. The area of the Utah Territory as organized in 1850 is shaded in pink.
Utah first petitioned for statehood starting in 1849, and a constitutional convention was called to draft a State Constitution for a proposed State of Deseret on March 8, 1849 to be held in Salt Lake City. The U.S. House of Representatives and Senate rejected the proposed state and followed up the rejection by creating the Territory of Utah. It wasn’t for another six years before the Fifth Territorial Legislature passed an act on December 10, 1855 establishing a constitutional convention to make a second attempt at Statehood. This second constitutional convention was held on March 17, 1856 in Salt Lake City and a proposed constitution was created which was subsequently rejected by the U.S. Congress.

A third constitutional convention was held on January 20, 1862 in Salt Lake City and a proposed constitution was drafted and subsequently submitted to the U.S. Congress which rejected the petition for statehood. The Twentieth Territorial Legislature on January 31, 1872 would call for a fourth constitutional convention and again petitioned Congress for statehood yet this effort also failed and it was not until April and May 1882 that a fifth and final attempt at statehood was made prior to Congress passing the Utah Enabling Act in 1894.

The Utah Territory proceeded to hold a constitutional convention on March 4, 1895 which ended on March 6, 1895 and the proposed Constitution was ratified by the voters Tuesday, November 5, 1895. The first election was also held on this day and state officials were elected. The First Utah State Legislature convened on January 13, 1896 and proceeded to conduct the business of organizing the state.

The current party composition of the Utah Senate is:

Composition of House of Representatives

The current party composition of the Utah House is:

The members of both houses of the Utah Legislature are elected on a partisan basis, and they conduct their proceedings including the elections of leadership according to membership in a party caucus. Currently, the state of Nebraska is the only state in the United States that is elected and conducted in a nonpartisan manner.

As of 2016, 88 percent of members of the Utah legislature were affiliated with The Church of Jesus Christ of Latter-Day Saints.

Committees and leadership
Further information: List of 57th Utah State Legislature Committees, John L. Valentine, and Greg Curtis
The Utah Senate elects a President of the Senate and the Utah House elects a Speaker, and each political party caucus in both houses elects party leadership including a majority leader, majority whip and assistant majority whip by the caucus with the most members in that house. The minority party caucus elects a minority leader, minority whip, assistant minority whip and includes one additional leadership position of minority caucus manager to offset the Speaker of the House and President of the Senate who are traditionally members of the majority caucus yet are elected by the entire membership of their respective bodies.

Over the years there have been many changes to the structure of the legislature, the number of Senators and Representatives, and the location of the Capitol, the Salt Lake Council Hall served as the meeting place for the Utah Territorial legislature, and in 1896 the Utah State Legislature designated Fillmore, Millard County, Utah, as the state capital. 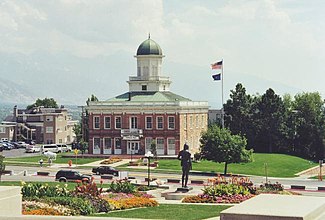 Council Hall as seen from in front of the State Capitol c. 2002.

After, being admitted to the Union as a State on January 4, 1896 by an act signed into law by President Grover Cleveland, the first official act of statehood was the swearing in of State officials at the Salt Lake Tabernacle on January 6, 1896, as Utah did not have an official State Capitol. Acting upon the recommendation of Governor John C. Cutler, the Utah Legislature finally approved a plan to build a State Capitol in 1909. Construction on the Capitol did not start until December 26, 1912, and it was not completed and dedicated until October 9, 1916.

OnAir membership is required. The lead Moderator for the discussions is Fatima Iftikhar. We encourage civil, honest, and safe discourse. See Terms of Service for curation guidelines.

This is an open discussion on the contents of this post.